The USDCAD idled in a quiet market. As expected the RBA left rates unchanged and AUDUSUD jumped. The statement was on the dovish side, complaining that the exchange rate will have a lesser impact in achieving balanced growth in the economy due to its recent rise, and AUD dropped. The Eurozone PMI’s were as expected providing Mr. Draghi and the ECB with more reasons to stay the course on Thursday. The US dollar may get a bit of a lift from a strong ISM report today however yesterday’s Yellen speech has managed to muddy the waters around the next Fed rate hike. Those that believed Apr. 2015 are re-reading the tea leaves.

View the article and trade directly on the new TradingFloor.com

April Fool’s Day may leave you vulnerable to the old but harmless "toothpaste in an Oreo" trick or even the door opening water shower gag but Friday’s US payrolls data can make your money disappear and make you look foolish at the same time. The current consensus forecasts is for a healthy gain of 196,000 which is likely to be revised higher as the day approaches and an increasing number of analysts buy into the "payback" theory. Inclement weather was believed to be behind the weak January and February reports giving rise to expectations that the March data will reflect pent-up demand-payback. In this environment, a consensus result would likely be a disappointment.

Chart: Change in US nonfarm payrolls 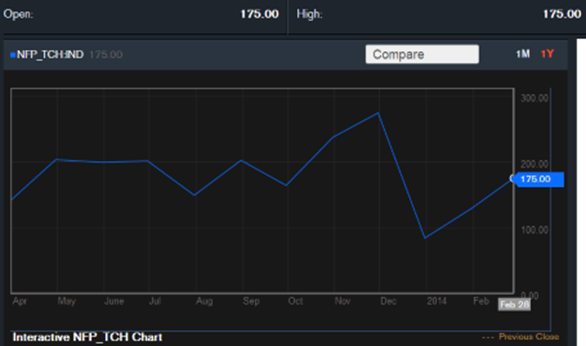 And speaking of disappointments…

The European Central Bank (ECB) rate decision and press conference is on Thursday. Early last week, Bundesbank President and ECB member Jens Weidemann opined about negative interest rates for use as a tool to combat the rising EUR. The initial reaction was to sell EURUSD which was short lived and the currency pair resumed its grind higher. Today, the Eurozone inflation rate for March was 0.5 percent, month over month which was below the consensus forecast. Different day, same result. Many economists from the major banks have been arguing that the ECB is poised to cut rates to counter deflationary risks for a couple of meetings now and have been disappointed every time. So far, Mario Draghi isn’t buying what those economists are selling. In the past, the pre-ECB meeting EURUSD selling was reversed immediately after the statement was released so perhaps this week’s pre-ECB meeting EURUSD buying meets the same fate.

Major US Data releases this week

Tuesday: March ISM Manufacturing Index-Forecast 54.0. If the US economic recovery is building momentum, it may be reflected in this release. The prior weather issues which may have held down the data were evident in March, suggesting that the result may surpass the forecast.

Thursday: February International Trade- Forecast deficit $38.9 billion. This release should be close to the forecast and have little FX impact.

Friday: March nonfarm payrolls -Forecast 196,000. The current market chatter implies a risk of a much better than expected result which may end up proving to be a disappointment.

Monday: January GDP-Actual 0.5 percent slightly better than the 0.4 percent forecast which helped to give the Canadian dollar a bit of a boost

Thursday: International Trade-Forecast Surplus. $0.16 billion. The fact that the trade data has returned to a surplus after many months in the red may provide the Canadian dollar with a little support in the long run.

Friday: Employment Report- Forecast 25,300, Unemployment rate 7.0 percent. Similar to the outlook for the US NFP, the Canadian report is expected to show a strong rebound due to "payback" from previous weather related soft reports.

Not so Committed on Loonie

The Commitment of Traders COT) report, as of March 25, provides a clear but hindsight view as to what was behind the sharp rise in the Canadian dollar for the past week or so. It appears that the speculative community bailed on stale short CAD positions and bought long CAD stakes. Long CAD positions jumped by 24,000 contracts while short CAD positions declined by 16,765 contracts. If anything, the longer term outlook for USDCAD is still bullish due to Central Bank policies. The US Federal Reserve is far closer to raising interest rates than the Bank of Canada and Canadian economic growth is widely expected to lag that of the US. The reduction in the size of the short CAD positions removes a key reason as to why USDCAD was unable to extend gains through the 1.1225-40 resistance zone.

The immediate risk is how big an effect that today’s month end and quarter end rebalancing flows have on the market today. With luck, they may provide opportunistic traders a chance to establish positions at the proverbial "better level". Having said that, the risk, albeit small, of the ECB making a major policy shift on Thursday combined with the ever increasing expectations of a robust US jobs reports, should give the US dollar a bid toward the end of the week.