Now the Fed can act, with impunity. Photo: iStock

This US nonfarm payrolls report came out as advertised. It was expected to be strong, and boy, was it strong. Janet Yellen will appear prophetic as she has maintained, at least for the past six months, that the US would raise rates in December.

Today’s NFP gives her the ammunition to do so.

Canada released its best employment report in four months, posting a better-than-expected increase of 44,000 jobs and a 0.1% drop in the unemployment rate to 7%. Canada has gained 143,000 jobs compared to a year earlier and best of all, they were all full-time.

Unfortunately, this report was overshadowed by the US NFP report but should serve to slow Canadian dollar losses.

The Canadian economy has new captain steering the ship.

Justin Trudeau’s new Liberal government made a surprisingly brilliant choice for Finance Minister and selected Bill Morneau, an accomplished businessman and former chair of the C. D. Howe Institute (economic think-tank). In doing so, he skipped over a couple of Liberal retreads including a former Finance Minister (Ralph Goodale) and a former Royal Bank of Canada Chief Economist (John McCallum). The only knock against him is that he is a political “rookie” which for many Canadian’s is a blessing.

Canadian’s are used to basking in the glow that comes from being America’s largest trading partner, a position that implied a close and favourable two-way relationship.

But that relationship has taken a turn for the worse. It appears that Uncle Sam has his eyes on a “trophy” wife, a younger, hotter and wealthier replacement and that wife is China. China is now the US’ largest trading partner and that relationship will only get stronger if the Trans-Pacific Partnership Agreement is adopted. 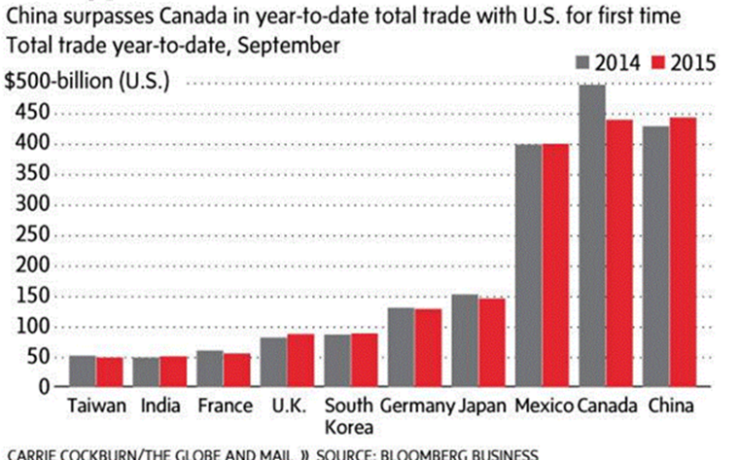 The Canadian dollar managed to hold its own (somewhat) following the surge of US dollar buying after the US employment report.

This week’s domestic economic data provided a bit of hope that the Canadian economy may be seeing some benefits from the expanding US economy which should act as a drag against broad-based US dollar gains. However, there isn’t much in the data cabinet next week.

That void leaves the currency direction up to the whims of general US dollar direction and WTI price movements. The US data cupboard is also bare of quality releases until Friday when Retail Sales is released but today’s NFP report should maintain the greenback’s bullish bias and therefore a negative bias on the loonie.

The USDCAD technicals are bullish, both short term and intraday. The uptrend from the May low remains intact while trading above 1.2960 while the October uptrend line comes into play in the 1.3090-10 area.

There was plenty of data and hot air which was expected to provide the drama for this week and for the most part it did.

Monday was a relatively quiet day around the globe, at least in FX circles. The China PMI data didn’t create much of a ripple.

Holiday’s in parts of Europe put a damper on European trading and a variety of EU PMIs had little to no impact on FX. A strong UK PMI print gave cable a boost and led to chatter about the likelihood of a hawkish Bank of England on Thursday. Oops, if they only knew.

The New York session was very dull and the day ended with AUDUSD traders looking for a rate cut from the RBA.

Japan was closed on Tuesday so the RBA got all the attention. It surprised a lot of people and left rates unchanged. AUDUSD dropped and then in the next breath rallied far above the pre-announcement level before drifting lower.

EURUSD was offered ahead of, and then following, Mario Draghi’s speech. Sterling was bid ahead of “Super Thursday”.

Crude oil prices staged an impressive rally during the New York session but not for any discernable reason. The big currency mover was kiwi which got crushed on a lower GlobalDairyTrade price index.

Wednesday was fairly quiet in Asia although USDJPY followed the Nikkei higher and Kiwi remained soft. In Europe, EURUSD was heavy and GBPUSD was drifting higher.

Thursday was a day of rest, except in the UK. There, it was “Super Thursday” because of the huge Bank of England data dump. The BoE left interest rates unchanged but cut its CPI forecast and expressed concerns about the outlook for global growth. That was enough to spark a quick unwind of long sterling positions.

This week lacks all the drama of the previous week but may still be fairly volatile. For starters, Monday’s China trade data will add to the fallout from today’s blowout US employment report.

There is more Chinese data on Tuesday which has relevance in light of all the various central Bank’s expressed concerns about “slowing growth in China”. Evidence of improved growth in China plus today’s NFP is a recipe for another leg higher in the US dollar rally.

The Bank of England, Mark Carney and Mario Draghi are in the spotlight on Wednesday which is also a bank holiday in Canada. Friday will be busy with Eurozone GDP data and US Retail sales will close the week.

The US has fallen for the beguiling charms of "a younger, hotter" China. Photo: iStock