Sterling flash crash warns all is not right with the world

· GBP flash crash may be an evil omen

· Wait for FOMC minutes will stifle trading early next week. 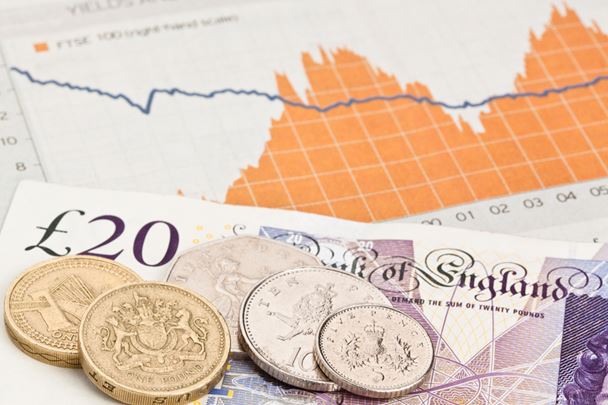 What a crazy week – GBP down, FTSE up. Photo: iStock

The overnight "flash-crash" in GBPUSDmay be a sign of things to come. Consider this, if the British pound is falling out of bed due to increased fears of a negative impact on the UK economy from Brexit, why would you buy UK equities. The FTSE100 index is up 0.70% which is a tad perplexing. October is known for stock market crashes, so why tempt fate?

USDCADis probing levels not seen since the middle of March. At that time, WTIoil was trading at $38.50/barrel. Today, WTI is trading at $50.70. Something is amiss.

Canadian data releases since September have, for the most part, shown a steadily, if unimpressive, improvement in the domestic economy. That may be a mirage. The September employment report showed an increase of 67,200 jobs and USDCAD dropped. The problem is that the headline is misleading. 50,100 of the new jobs are in the self-employed category which is an indication of former full-time employees trying to earn a living.

The Bank of Canada remains concerned about Canada’s persistent low level of inflation and on September 20 pushed back its expectations for a domestic recovery.

The oil price rally should be providing support to the Canadian dollar. At the moment it isn’t. Some speculate that the news of a new Federal government carbon tax will have a negative impact on Canada’s energy industry as it will raise the price of domestic crude significantly if the proposed $50 per metric ton by 2022 is implemented.

USDCAD has been in a 1.2650-1.3300 range since May and retreated from significant resistance just below the 1.3315 area which represents the 38.2% Fibonacci retracement of the 2016 trading band. The uptrend line from the September low remains intact while prices are above 1.3050.

The risk of rising US rates and Canadian economic growth continuing to lag that of the US suggests that as long as prices are above 1.3050 the risk is for additional gains to the 1.3500-1.3800 level. However, if WTI prices continue to climb, 1.3315 will remain major resistance.

This week will be a short one for Canadians (Thanksgiving) and Americans (Columbus Day).GBPUSDtraders will still be dealing with the fall-out from the Asia collapse. Elsewhere, there isn’t a whole lot of major economic data releases to drive trading until US Retail Sales on Friday.

On Wednesday, the minutes from the Federal Open Market Committee meeting on September 21st will be released. Various Fed speakers had dropped hints of a rate increase prior to the meeting so analysts will try to gauge sentiment for a December move.

The week of a nonfarm payrolls release tends to see jerky trading as positions are adjusted to reflect prevailing sentiment. That was certainly the case this week except for the British pound. GBPUSD was offered all week and collapsed on Friday

On Monday, Asia traders were not singing “rule Britannia” but the Britain ruled the FX markets nonetheless. UK Prime Minister Theresa May told the Conservative conference on the weekend that Article 50 would be invoked in March. In a thinner than usual market due to holidays in China and Australia, GBPUSD started to slide. The slide picked up speed when the European session began. Oil prices rose on optimism that the previously announced Opec production cap would be effective. The US dollar caught a bid following a stronger than expected ISM PMI report and finished the day on firm footing.

Tuesday, Asia traders continued to buy US dollars. Aussie and Kiwi were sold while USDJPY rallied. EURUSD and GBPUSD were fairly steady until Europe opened. Then both currency pairs were sold. Rising US rate hike sentiment and increased fears of an acrimonious Brexit negotiation were behind the moves. More hawkish rhetoric from Richmond Fed President Lacker kept rate hike concerns on the front burner and EURUSD under pressure. That changed when Bloomberg reported “sources” at the ECB talking about building a consensus for tapering. EURUSD soared. GBPUSD traded down all session. Oil prices spiked at the end of the day on an API report of a large crude draw-down. Gold broke major support in the $1,306.00 area and plummeted.

Wednesday, Asia saw continued NZDUSD selling due to a poor GlobalDairyTrade index results that were released during the New York session. The ECB taper talk was front and center and EURUSD declined. AUDUSD followed Kiwi lower while ignoring a strong Retail Sales report.

GBPUSD got crushed in Europe due to ongoing concerns about Brexit negotiations but profit taking in New York lifted it off the lows and took it back to 1.2745. EURUSD traded lower within a narrow declining band, undermined by strong US data (Trade, ISM non-manufacturing) and ECB tapering concerns. USDJPY punched above 103.20 and hasn’t looked bank since. Oil prices got an “extra” lift from a decline in US crude inventories as reported by EIA., which corroborated Tuesday’s API data.

Thursday, FX trading was subdued in Asia. Traders ignored a better than expected Australia trade report and sold AUDUSD. USDJPY continued to climb steadily supported by a mix of hawkish Fed rhetoric and diminished rate cut fears in Japan. European traders sold EURUSD and GBPUSD. It didn’t help that German Chancellor Angela Merkel admitted that Brexit negotiations wouldn’t be easy. In New York, a strong jobless claims report fueled additional US dollar buying ahead of Friday’s nonfarm payrolls report. GBPUSD came under renewed selling pressure. Oil prices broke the $50.00/b level which failed to provide support to the Canadian dollar USDCAD. The day ended with the US dollar posting gains against all the G10 currencies except for UDUSD and NZDUSD. Gold prices were probing support at $1,255 by the end of the day.

If only this oil could fuel the world economy… Photo: iStock