President Trump is not your grandma’s president

· Week ahead may lack the excitement of previous weeks 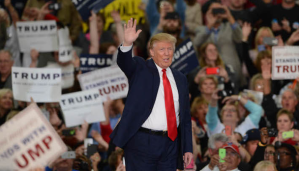 The press has not been hugely complimentary of US president Donald Trump since he took office, but that doesn’t mean he’s not popular. Photo: White House

There is no shortage of stories about president Trump, especially negative ones. He has managed to thoroughly irk the media, particularly journalists from CNN, the Washington Post and New York Times.

Supposedly objective reporters deliver stories about the president and his policies while spitting venom and bursting blood vessels. “Never has so much vitriol been spewed by so many about so few,” Winston Churchill might have said of the media’s coverage of Trump.

It appears that the bulk of employees of mainstream media did not vote for Trump, and it shows in their reporting. Hollywood has gotten in on the act, too.

Actors get a lot of attention for spouting anti-Trump comments, even though many of them are unable to string two sentences together if they are not written by someone else and spelled out on a teleprompter.

Leonardo DiCaprio is a perfect example. He is considered a climate change expert. While filming the Revenant in Alberta, Canada, the high school drop-out experienced a “Chinook”. A Chinook is a warm, dry, gusty westerly wind that blows down from the Rocky Mountains and It is as common as sand in a desert.

Leo was impressed. The CBC reported that in an interview with Variety magazine he described his experience thus:

“It was scary. I’ve never experienced something so firsthand that was so dramatic. You see the fragility of nature and how easily things can be completely transformed with just a few degrees difference. It’s terrifying, and it’s what people are talking about all over the world. And it’s simply just going to get worse.”

Climate Accord, Leonardo DiCaprio has been a prominent advocate for

When idiots are given a podium, the message gets muddled.

That is exactly what is happening with Trump coverage. No one is reporting about massive demonstrations by autoworkers in Michigan and Ohio, upset because President Trump wants American cars to be built by Americans in America – that’s because it isn’t happening.

How do American workers benefit by exporting their high-priced jobs to third world countries? They don’t. It is tough to live the American dream if your only career choice is part-time work in the hospitality industry.

The immigration ban was blown out of proportion. Trump was vilified while Obama was praised for doing the same thing.

Nimble traders are getting wise to the media hype and hysteria and are quick to run with, then fade, US dollar moves following an inflammatory headline.

The week that will be:

It will be a short week for Canadian and US traders due to national holidays on Monday. A US holiday on a Monday is usually a precursor to a quiet trading day in Asia and Europe, which will likely be the case this week as well.

US rate hike considerations, the release of the Federal Open Market Committee minutes on Wednesday and president Trump tweet risks will serve to limit the impact of preliminary PMI data in Europe, released Tuesday. The day will start with AUDUSD traders reading and maybe reacting to the Reserve Bank of Australia minutes.

Wednesday, sterling will be vulnerable to GDP data while EURUSD traders will key in on the Eurozone inflation report. USDCAD traders will focus on retail sales and everyone will be waiting for the FOMC minutes. They may be disappointed as Janet Yellen’s testimony last week might have stolen the thunder.

Thursday is full of second-tier data from the Eurozone, but otherwise doesn’t look very interesting.

The week will end with CPI data from Canada and the Michigan Consumer Sentiment Index. All in all, not a lot of fodder for traders.

This week lacked the drama and excitement of previous weeks, but fortunately Federal Reserve chair Janet Yellen was able to stir the pot, even if was only for a short time.

Monday started tentatively and yen traders were relieved that the weekend’s Trump-Abe meeting went smoothly, which helped USDJPY to tick higher in Asia. EURUSD declined from its Asia peak of 1.0655 to 1.0588 by mid-morning in New York, where it spent the rest of the day. Traders were waiting for Tuesday and Janet Yellen’s testimony to Congress.

Federal Reserve chair Janet Yellen’s comments triggered a lot of excitement, but that soon died down. Photo: the Fed

In the New York session, Janet Yellen’s speech was considered hawkish and the US dollar soared. USDJPY rallied to 114.49 from 111.30 while EURUSD probed support in the 1.0560 area. Strong PPI data told Wall Street that the economy was humming along and equities closed higher for the day.

Wednesday, the US dollar extended its gains in Asia and AUDUSD rose as well, supported by a positive economic outlook. The move did not last. In Europe, sterling took a hit on soft data. EURUSD traded sideways in Asia and headed lower in Europe, undermined by politics in France and Greek debt issues. The single currency hit 105.20 in the New York morning. GBPUSD touched 1.2382 at the same time as USDJPY rose to 114.96. Those moves were in response to stronger than expected US data, which included big gains in retail sales and inflation; but it was over quickly.

EURUSD rallied to 1.0608 by lunchtime (which is where it finished the day) and USDJPY dropped from 114.94 to 113.84. sterling bounced back to 1.2477 and there wasn’t a specific reason for the change in sentiment. Oil prices whip-sawed; torn between rising US inventories and Opec production cuts.

Thursday, the US dollar selling pressure continued unabated and extended into the New York open. AUDUSD tried to rally on better than expected employment data but that move ran out of steam. Traders were chalking up the US dollar moves to profit taking after the greenback had made strong gains for the past two weeks.

Friday, sterling was the big loser due to a soft retail sales report. The dollar appeared to be ending the week on a mixed note. The greenback managed gains against the commodity bloc currencies and sterling but drifted lower against the European currencies and yen.