· US durable goods data were close to expectations and ignored

· FX markets should be fairly volatile next week due to data and month end.

The Canadian dollar gets its nickname "loonie" from

Traders are just glad that this week will soon be over, as much of it was spent waiting for central bankers, including the Fed chief Janet Yellen and the ECB president Mario Draghi, to speak at Jackson Hole, Wyoming.

Yellen was scheduled to begin speaking (shortly after the time of writing) at 1400 GMT and Draghi at 1900 GMT on Friday.

Meanwhile, USDCAD has dropped 7% since the Bank of Canada announced a shift to tighter policy in mid-June. In that time, EURUSD rallied 5.25%, and AUDUSD climbed 4.94%. No other currency pair (among the majors) is even close.

How big of a drop is too big?

If you believe the currency strategists from CIBC, the answer is right around the current level. They think the market has got ahead of itself regarding Bank of Canada and Fed rate hike paths. CIBC does not think that Canadian rate increases will surpass those of the US by the end of 2017, eliminating one reason for selling USDCAD. They expect the BoC to signal a “go-slow” approach in September, hike in October and then hit the pause button. Meanwhile, renewed interest rate increases by the Fed will boost USDCAD.

CIBC Forecast of rate increases for Canada and US 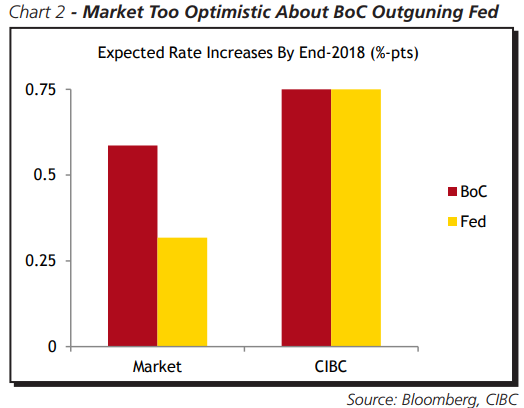 TD Bank strategists point to a slowdown in third-quarter GDP growth, which should limit USDCAD downside. They also believe that most of the good economic news is already priced into the currency.

The state of the NAFTA negotiations may also put a floor under USDCAD. US president Donald Trump is still threatening to "terminate" the agreement, even as the parties are supposedly negotiating in good faith.

Oil prices are steady. If Opec is right and the supply/demand imbalance begins to normalise near the end of this year and in early 2018, USDCAD rallies will be capped.

Speculative long CAD positions are not at extreme levels, which should reduce the risk of a spike in USDCAD triggering large stop-loss orders.

President Trump is the US dollar’s worst enemy. His mostly brain-dead comments have been a major source of USD weakness in the past and he is unlikely to change.

The USDCAD is stale. It is overdue for a correction, but as long as the BoC is in a tightening mode and the Fed stays cautious, the bearish USDCAD technicals will prevail.

The coming week will make up for whatever the previous week lacked in data and drama. It will end with a bang, thanks to the US nonfarm payrolls report on Friday.

On Monday, Asia will deal with any fallout from the Jackson Hole speeches by Yellen or Draghi. If the speeches are “non-events,” it will be a very quiet day due to a lack of top-tier data and a UK bank holiday.

Tuesday will start with Japan’s unemployment report, and if that doesn’t cause a stir, it will be a fairly quiet day again. European and US economic releases are third-tier.

Wednesday will bring plenty of data to cause a commotion. Japanese retail sales, New Zealand building permits and Australian construction figures will be the focus in Asia. UK mortgage approvals and individual lending reports will distract GBPUSD traders. EURUSD will be guided by German HiCP and Eurozone sentiment indicators. US second-quarter GDP and the ADP employment change report will keep New York traders busy.

On Thursday, Japan’s industrial production data is slated for release. China will enter the fray with NBS PMI data, which will keep Aussie traders on their toes. It’s a big day in the Eurozone. August CPI, German retail sales, and unemployment reports will set the tone for the rest of the day. The US has a lot of data on tap, including jobless claims, Chicago PMI, personal consumption expenditures price index, and pending home sales. Canada’s June GDP will be the focus for USDCAD traders. It is also month-end which brings the usual portfolio rebalancing flows.

FX traders didn’t expect much trading action this week due to the possible risks from the Fed’s annual Jackson Hole symposium. They saw President Trump as the only trading catalyst. They were right on both counts.

Monday might as well have been Sunday, judging by the FX activity in Asia and Europe. It got a little better in New York. A rumour that the ECB’s Draghi would use Jackson Hole as a forum to announce the end of quantitative easing powered EURUSD o 1.1827 from 1.1732. USDJPY inched lower, partly due to US military exercises in South Korea antagonising North Korea. The commodity currency bloc finished on an "up" note, though the highlight of the day was the solar eclipse.

Tuesday was a lot like Monday, except without the Draghi rumours. Asian FX activity was almost non-existent. It got a little better in Europe when a weaker-than-expected Eurozone ZEW survey drove EURUSD lower. Sterling followed suit, and the US dollar opened in New York with gains across the board. But it didn’t end that way. FX traders ignored a good rally on Wall Street, sparked by rumours that the White House was making progress on tax cut plans. The American Petroleum Institute’s weekly crude stocks data appeared to have been leaked as the actual 3.5-million-barrel drawdown was the same as the whisper number.

New York markets reacted to Trump’s comments from the previous evening when he threatened to shut down the government if he doesn’t get funding for his Mexico border wall. Those comments, weaker-than-expected US Markit PMI data and Fitch warning about the US AAA debt rating if the debt ceiling not raised, drove the USD and Wall Street lower. Oil prices climbed after the US Energy Information Administration reported another drawdown in crude oil inventories

Thursday was very quiet in Asia, Europe and New York. Traders were reluctant to trade ahead of speeches by Fed chief Yellen and the ECB president Draghi on Friday. So they didn’t. NZDUSD barely reacted to news of a trade surplus in July. Oil prices were firm due to fears that a major storm would disrupt Gulf of Mexico production. US data was mixed. Jobless claims beat forecasts, while existing home sales missed. Oil prices dropped 1.2% on fears that refinery closures on the US Gulf Coast due to Hurricane Harvey would reduce demand for crude.

On Friday, FX markets weren’t closed, they just seemed that way. Even the usually entertaining US durable goods orders didn’t cause much of a stir due to the shadow of the Jackson Hole symposium.